Come along to Barbara’s launch for her new book ‘White Australia Has a Black History‘ and her very latest book ‘Shattered Lives Broken Dreams‘, on the 2nd of February 2020 at the Sydney Jewish Museum.

Barbara would love to see you there!

Author Barbara Miller is giving a talk at the LAMM Jewish Library of Australia in the first week of December. Come and hear her speak on her William Cooper books and the Holocaust. 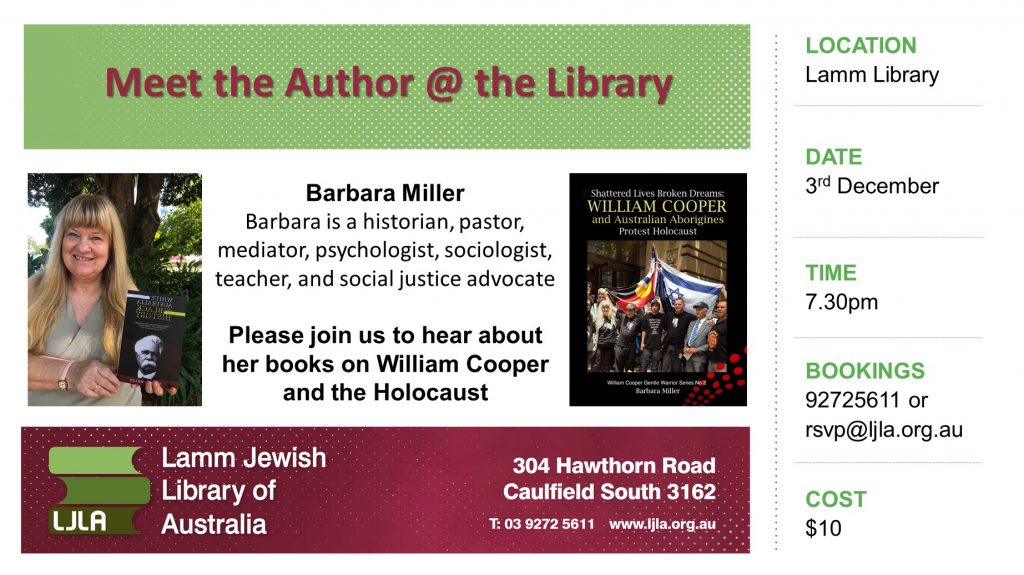 Barbara will have a give-away of chapter one with a cover photo of her soon coming book ‘Shattered Lives Broken Dreams: William Cooper and Australian Aborigines Protest Holocaust‘

We hope to see you there!

If you can get there, go to the wonderfully creative Kristallnacht Cantata in Melbourne on 8 Dec where you will hear world-class musicians and singers and hear an imagined duet between Aboriginal William Cooper and Kristallnacht survivor Otto Jontof-Hutter. If you can’t make it, consider donating to this worthy cause. Anything above the production costs will go to the Aboriginal group Mullum Mullum Gathering Place -they need repairs to their building- and also accommodation for the homeless. The Mullum Mullum Yeng Gali Choir will be singing in the first half-and invited Otto’s grandson Ron to play Amazing Grace with them. The link to donate is https://australianculturalfund.org.au/projects/kristallnacht-cantata/

Barbara will also have a give-away of chapter one with a cover photo of her soon coming book Shattered Lives Broken Dreams: William Cooper and Australian Aborigines Protest Holocaust.

We hope to see you there!

Barbara is guest speaker for Library Week at the Smithfield Library at 10.30am 23 May 19 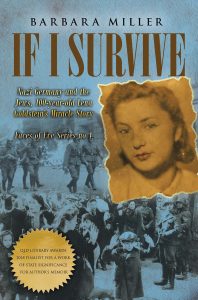 “If I Survive.” This thought haunted Lena. Her loved ones were cruelly forced from her armsin the Warsaw Ghetto in Poland and perished in Treblinka Death Camp. This is a true storyof Holocaust survival. Lena kept thinking, “It’s my turn next.” How did she survive?

Author Barbara Miller tells Lena’s compelling story from interviews, her diary and historicalresearch to put it in context.

Book to be launched by John Searle, Barrister. 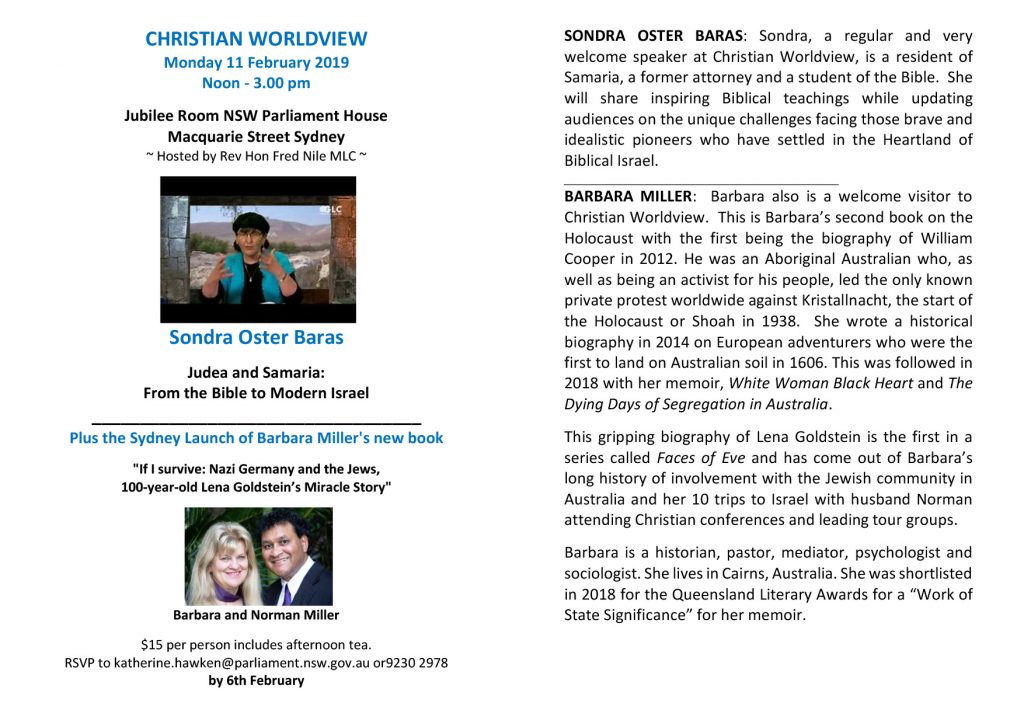 Book Launch: If I Survive

If I Survive: Nazi Germany and the Jews, 100-Year-Old Lena Goldstein’s Miracle Story by author Barbara Miller tells the story of Holocaust survivor Helena (Lena) Goldstein. Lena has been a volunteer at the Sydney Jewish Museum since its inception 26 years ago. Aged 100, Lena continues to tell her story of survival to groups of students at the Museum.
This is Barbara’s second book on the topic of the Holocaust. Her first, published in 2012, explored the life of William Cooper, an Indigenous Australian after whom an Academic Chair of Resistance to the Holocaust was named in 2010. Barbara is a psychologist and sociologist, and was shortlisted for the Queensland Literary Awards for the Qld Premiers Award for a Work of State Significance in 2018 for her book, White Woman Black Heart, Journey Home to Old Mapoon, A Memoir.

Barbara Miller has written this book, a continuum to the trilogy of the Mapoon books and towards the modern history of the western Cape York region. It is a testimony to the endurance and resilience of the people of the district and the determination of the people to return to the land of their forefathers.

Please RSVP by 23 July for catering. 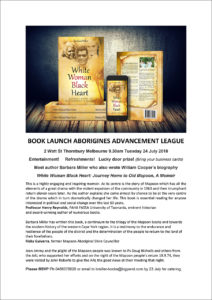 This event commences at 6.30pm. Printed tickets are not issued and your booking will be on a door list under your surname.

Barbara often found herself saying, “the stork dropped me at the wrong house’ only to find she was repeating her mother’s words. In this riveting memoir exploring race relations and social change, Aboriginal elder Burnum Burnum, told her, “you may be white but you have a black heart, as you understand my people and feel our heart.’ He suggested to International Development Action that she take on the Mapoon project and played matchmaker by introducing her to Aboriginal teacher and Australian civil rights movement leader Mick Miller.

The Mapoon Aborigines were forcibly moved off their land by the Queensland government in NE Australia in 1963 to make way for mining. With an effective team behind her, Barbara helped them move back in 1974 to much government opposition which saw her under house arrest with Marjorie Wymarra. It also saw Jerry Hudson and Barbara taken to court.

In helping the Mapoon people return to their homeland, she found her home as part of an Aboriginal family, firstly Mick’s and later Norman’s as she remarried many years later, now being with her soulmate Norman about 30 years. It is a must read for those interested in ethnic studies and political science as an isolated outback community whose houses, school, health clinic, store and church were burnt to the ground rose from the ashes and rebuilt despite all the odds. It is a testimony to the Mapoon people’s strength.

Barbara’s husband Norman will be performing a song he wrote called ‘Reconciliation’.

From her background in a poor working class white family in urban Australia, Barbara, with Aboriginal husband Norman, who is also a pastor, travel the world. They have a calling to heal groups from the wounds of history through the Centre for International Reconciliation and Peace they co-founded in 1998. This work has taken them to Israel, Jordan, Turkey, England, Zimbabwe, Canada, USA, PNG, Vanuatu and many other places.

Barbara has worked at the coalface of Aboriginal affairs in Australia from her involvement in the Aboriginal Tent Embassy demonstrations in Canberra in 1972 to helping the Mapoon people move back to their land in 1974, to co-founding the North Queensland Land Council with former husband Mick Miller in 1977 to being CEO of the Aboriginal Co-ordinating Council (ACC) in the 1990’s and much more. The ACC was the only statutory advisory body to the Queensland government on Aboriginal affairs at the time and represented local government Aboriginal councils who had a land base.

Barbara Miller is an intriguing combination of social justice campaigner and researcher with sociological training. As a psychologist, she has helped many people break free of mindsets that have prevented them reaching their full potential. 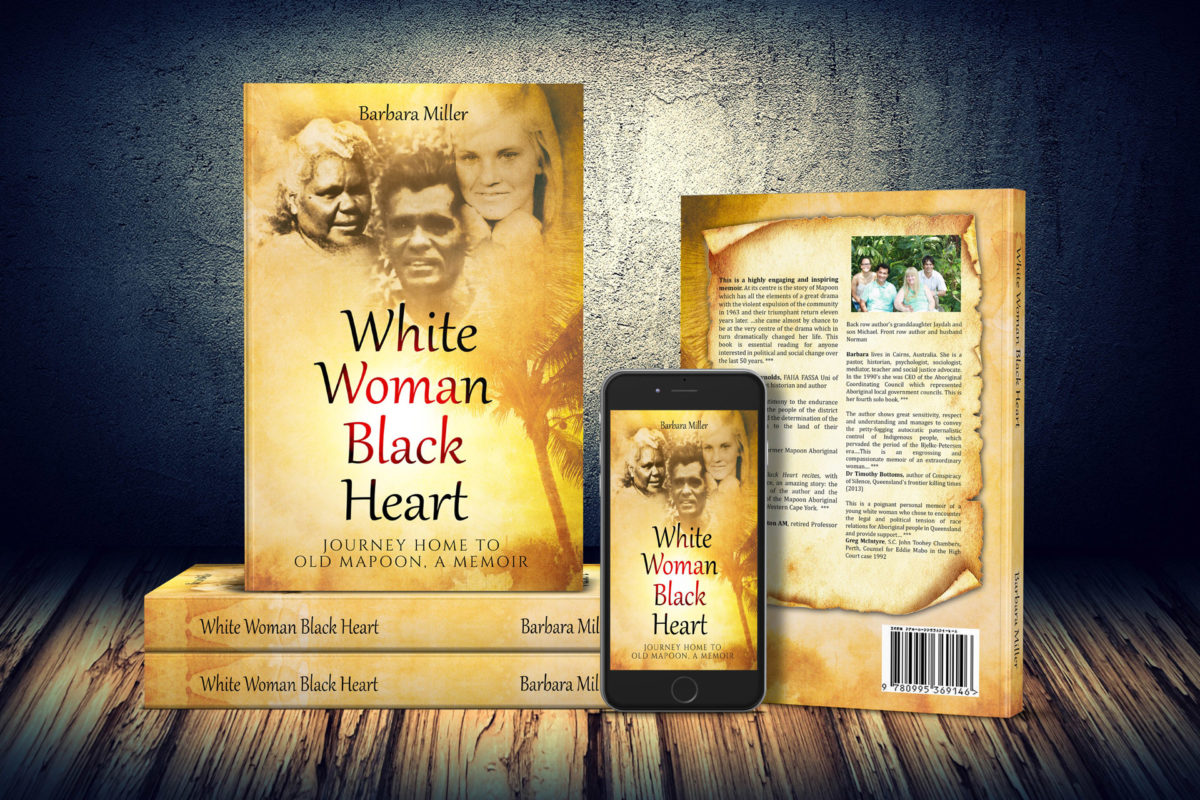 Purpose of the Bill: To make provision with respect to slavery, slavery-like practices and human trafficking and to provide for the appointment and functions of an Anti-Slavery Commissioner and for other purposes.

And Book Launch/Signing with BARBARA MILLER and her book ‘White Woman Black Heart: 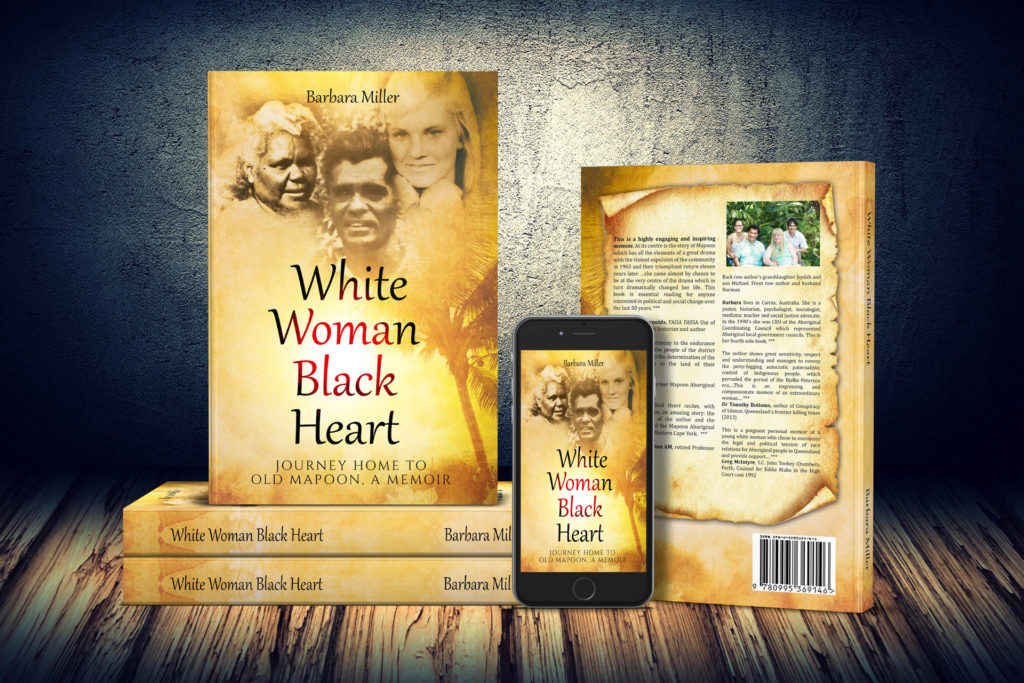