Faces of Eve Series no 1 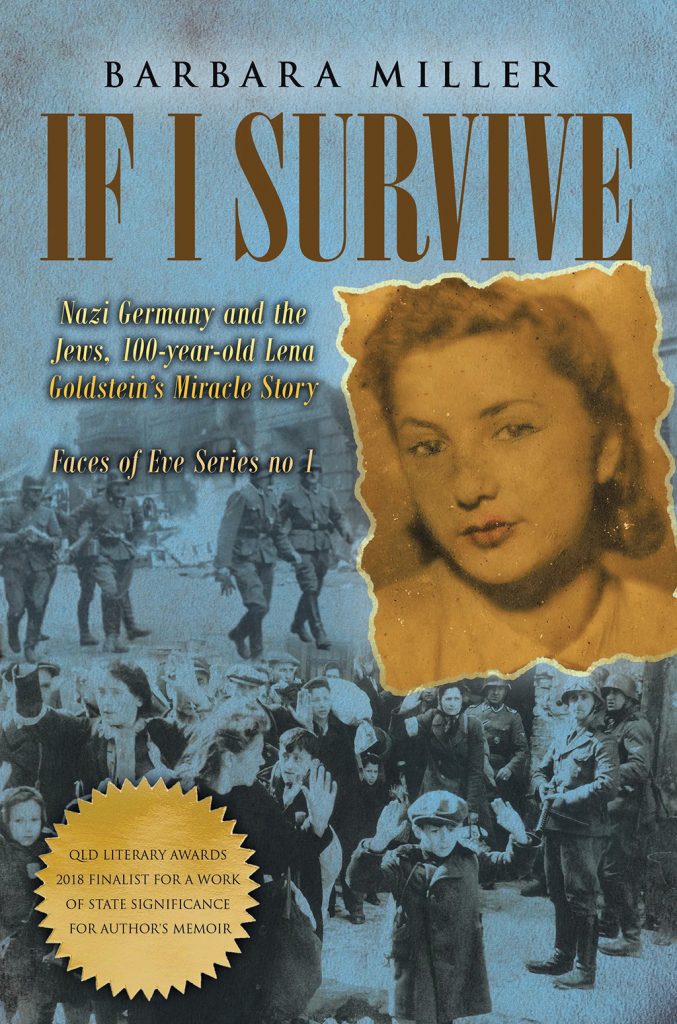 “If I Survive.” This thought haunted Lena. Almost all her loved ones were cruelly forced from her arms in the Warsaw Ghetto in Poland and perished in Treblinka Death Camp.

This is a true story of Holocaust survival. The story of Nazi Germany and the Jews is a story of anti-Semitism, gas chambers, genocide and World War 11. The Warsaw ghetto where the Nazis had imprisoned the Jews was being emptied as Adolph Hitler’s Final Solution to murder all of European Jewry was put into action. Lena kept thinking, “It’s my turn next.” As some Jews escaped Treblinka and exposed it as being a death camp not a labour camp, young men and women in the ghetto decided to make a stand. Lena helped in the resistance which became the Warsaw Ghetto Uprising by gathering light bulbs from empty houses which could be used for Molotov cocktails. By a miracle, she escaped the ghetto before it became an inferno. But where could she hide? After 18 months in hiding, she found herself tossed out on the streets of war-torn Warsaw. The Poles had risen up against the Germans who crushed the resistance and levelled the city. Where could Lena hide? How did she maintain the will to survive? When it was over and she could walk free, the tears she had held back flooded out because she was all alone and there was no one to care that she had survived and no one to go to. How to rebuild from all the destruction?

Author Barbara Miller adds to Holocaust history by skilfully weaving her research with Lena’s diary and interviews to bring her biography to life. Lena helped her companions in hiding to survive with her humour and compassion. She is 100 in January 2019 and her miraculous story of survival against the odds will inspire you to not give up no matter how dark the time or difficult the situation or cruel the people around you. 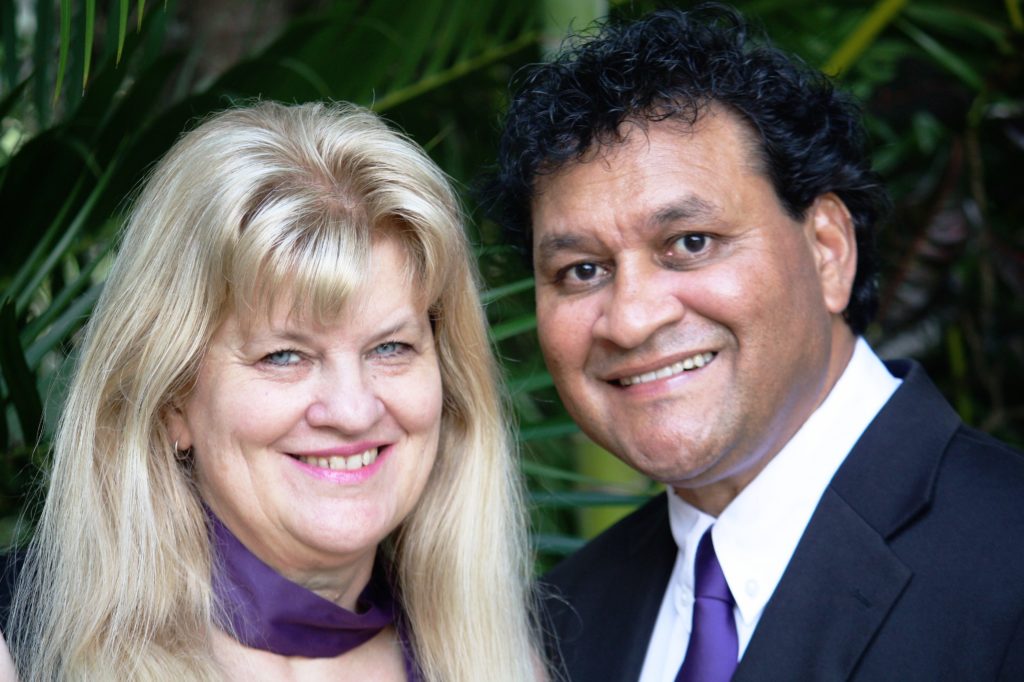 This is Barbara’s second book on the Holocaust with the first being the biography of William Cooper in 2012. He was an Aboriginal Australian who, as well as being an activist for his people, led the only known private protest worldwide against Kristallnacht, the start of the Holocaust or Shoah in 1938. She wrote a historical biography in 2014 on European adventurers who were the first to land on Australian soil in 1606. This was followed in 2018 with her memoir, White Woman Black Heart and The Dying Days of Segregation in Australia. This gripping biography of Lena Goldstein is the first in a series called Faces of Eve and has come out of Barbara’s long history of involvement with the Jewish community in Australia and her 10 trips to Israel with husband Norman attending Christian conferences and leading tour groups. Barbara is a historian, pastor, mediator, psychologist and sociologist. She lives in Cairns, Australia. She was shortlisted in 2018 for the Queensland Literary Awards for a “Work of State Significance” for her memoir.

“This is a compelling, indeed exemplary work, that merges the history of the Holocaust with the live story of one survivor: Lena Goldstein, aged 100, one of the last living witnesses to the horrors of the Holocaust.

Barbara Miller is helping to keep Lena’s voice alive, in doing
so, she fulfils the Jewish Mitzvah of Zachor – To Remember”

“Lena Goldstein is perhaps one of the last survivors at the age of 100 who witnessed personally the situation and conditions which existed in the Warsaw ghetto during World War II. The deportations and the rumours of mass killings (at the time thought unbelievable) proved to be true. Lena survived as she said by miracles but if it were not for her positive spirit, resilience and humour the outcome could have been very different.

Barbara Miller’s work is extremely informative not only of the conditions of that time but also of the historical background that created the opportunity for what we now know as the Holocaust and ultimately the destruction of European Jewry. The world looked away!!!”

In this concise, compact and highly readable book, the author and her subject have collaborated to produce an invaluable record of not merely one person’s extraordinary experiences but of the backdrop of horrific world events. Lena Goldstein found in Barbara Miller the ideal biographer and together they document the real, living, complex human beings who faced, and perpetrated, incredible evil. The reader is quickly drawn in to the world of those whom the Nazis had targeted for murder, with the challenges and complexities facing a single individual given the context of the brutality of some and the kindness of others. Barbara Miller allows each reader to learn and also encourages deep reflection on how humankind could include such an episode in its story.

Lena Goldstein has shaped many lives through telling her personal story of a survival which in many ways appears miraculous, although her interactions were, at every stage, with men and women who themselves were making life and death choices. While her story is unique, it provides a window into a world which never should have been – and now should never be forgotten.

“If I Survive” deserves to be read widely, discussed and, above all, appreciated. The humanity, personal dignity and integrity of Lena Goldstein is inspirational. It is to the author’s great credit that she has produced a wonderful, multi-dimensional account of this extraordinary woman’s life.”

How was it possible that some Jews managed to survive the Nazi regime?

This is Lena’s riveting personal story of her long years evading the fate of being captured and murdered like so many of her family and friends. It is one of a heroic eye witness and now 100-year-old “memory keeper” to a time and place in history that needs to be remembered not only to validate the fate of those who perished but for the generations who follow.

Barbara Miller’s carefully researched book, enriched by Lena’s telling of her own story, describes Lena’s early days in Lublin, Poland, in the 1920s surrounded by a loving family, close community ties and abundant culture. Germany’s calculated invasion of Poland on September 1st 1939 created a world of state sponsored anti-Jewish terror, persecution on the streets, starvation in the ghettos and mass deportations to death camps.

It should not be forgotten. Lena’s ultimate survival, like that of other Holocaust survivors, depended on the selfless acts of genuine kindness by strangers who risked their lives and those of their own families to resist the evil injustice of Jewish genocide.

The strong message resonating throughout this powerful book is “to inspire and inform future generations to never lose hope.”

Another important book from the celebrated writer Barbara Miller. Expertly researched and skillfully written, this personal story of a hundred-year-old Warsaw Ghetto survivor becomes a heart-wrenching narrative of heroism and perseverance against all odds. A significant addition to the Holocaust studies, this book is a must-read.

Author of The Dao of Being Jewish and Other Stories: Seeking Jewish narrative all over the World

In Lena Goldstein’s story, we journey from her youth in Lublin Poland, through her life and death struggle in the Warsaw Ghetto, to a new life in Australia. Weaving this within the historical context, author Barbara Miller creates a gripping account of how Lena survived the lowest ebb in Jewish history. Lena’s story will inspire the next generation to be upstanders, and always to have hope!

Educator, genealogist and filmmaker – WE ARE HERE! Foundation

Author’s note – Hirsh Glik, age 22, wrote the Partisans’ Song, Zog Nit Keynmol, in the Vilna Ghetto in 1943. Written in Yiddish, it means “Never Say”. He was inspired by the Warsaw Ghetto Uprising and the partisan cause generally. It is a powerful song of resistance and has been the hymn of Holocaust survivors for generations. Now, through an international project of the WE ARE HERE! Foundation, the Partisans’ Song is inspiring a new generation of Upstanders. It is now being sung in different languages, even in one of the Australian Aboriginal languages – Noongar. For more information see the following link:

By opening the door and allowing us to see into the life of Lena Goldstein, Barbara Miller has actually allowed us to gaze upon a whole generation of Holocaust victims, those that perished at the hands of the Nazis and those that survived.

This book is a tribute to human resilience. Lena Goldstein, like so many others, demonstrated that the human spirit can rise to a point of being unconquerable. We read about the loss of her family, her emotions on the day of her boyfriend’s birthday, knowing that he was not spared to see his 27th year and the isolation she felt upon freedom, realising that there was not one person in the whole world waiting for her. In spite of this, Lena triumphs and to this day continues to tell her story, and the story of the Holocaust, so she can play her part to fulfill the dream “Never Again”.

We must all learn from this book. The kindness of the caretaker who risked his life to help Lena, and the actions of Lena’s father who shared his inadequate food with a desperate old man teach us that every one of us can make a difference.

In this book, Barbara Miller has reinforced this lesson with passion and power through a terrifying account of the atrocities suffered by Lena Goldstein and millions of others during the Holocaust. This book deserves to play a part in shaping human behavior into the future.

One of my heroes is Nobel Laureate and Holocaust survivor, Elie Wiesel. I quote from his Memoir A Jew Today, Chapter “A Plea for the Survivors:”

“The victims were naive enough to feel certain that the so-called civilised world knew nothing of their plight. If the killers could kill freely, it was only because the Allies were not informed.

They were wrong, people knew and remained silent. People knew and did nothing. Fortunately, the survivors found out only after the Liberation.”

The message that Barbara Miller impresses on us through this interview with Lena Goldstein is to be wary of those who deny the Holocaust, be wary of their evil intent to maybe revisit it. Thank you, Barbara.

I make these comments as child refugee from Nazi Europe (reffo as I was called at school).