Barbara is guest speaker for Library Week at the Smithfield Library at 10.30am 23 May 19 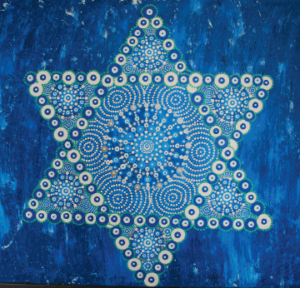 Over 250 people attended the launch of a documentary that captures the heart. Called “Ties That Bind, From Auschwitz to Cummeragunja” and directed by Viv Parry, it features interviews with and discussion between Holocaust survivor Moshe Fiszman (95 years) and Uncle Boydie (Alf Turner, 89 years), grandson of William Cooper. It is produced and edited by international award winning screen play  writer/ director Justin Olstein. Stan Yarramunua played the didjeridoo. Holocaust inspired art by Galiamble Aboriginal men added to the occasion. The launch was held at the Jewish Holocaust Centre at Elsternwick.

” Barbara Miller called her biography of William Cooper, Gentle Warrior, the same could be said of Uncle Boydie.   Uncle Boydie leaves an indelible mark on your heart and mind as he expresses with great honesty the things that matter most to him. You witnessed Uncle saying “ sorry “ to Moshe, this from a man who stills hold out hope for more than just a passing apology to his people. Uncle Boydie has dedicated a huge part of his life to continuing the legacy of his late grandfather Mr. William Cooper. His   passion to complete the   dreams and aspirations of his grandfather’s work as he approaches his 89th year, is truly inspirational and selfless.

Assisting to break down the walls and barriers to such an achievement is Uncle Boydie ‘s right hand man the undeniably passionate Abe Schwartz, Anyone who would like to learn more , please don’t hesitate to speak with Abe. ”

Barbara you were with us in spirit and in words, and  now have the opportunity to share my film on your website.

I am so grateful for your support , your advice and knowledge of the Family made all the difference. I am truly grateful.”

Viv’s enthusiastic steering of this project which was her vision is inspiring too. She says:

“I brought the men together to share with each other the story of their early years. Uncle Boydie narrowly avoiding being part of the Stolen Generation  on  Cummeragunja Mission,  Moshe existing on starvation rations in the Radom Ghetto, Poland , eventually  transported to Auschwitz.
The film covers Krystallnacht, the Warsaw Ghetto Uprising, William Cooper’s part in the Aboriginal Advancement League , the recreation of William Cooper’s brave protest December 6th, 1938 to the German Consulate, the Stolen Generation and the plight of  Aboriginal children and their families.
Both men show empathy, respect and compassion to  each other , William Cooper is the tie that binds the two communities.
Austrian Composer Mordechai Gebirtig, (murdered by the Nazis in 1942, ) composition KINDER YORN, concludes the film. International Virtuoso soloist Violinist, Mr. Boris Savchuk who resides in Israel, generously  re-recorded his rendition for the film as his contribution,  in memory of his own  Holocaust  history.
The program includes, Stan Yarramunua outstanding Didgeridoo player, Uncle Boydie and Moshe Fiszman and Holocaust inspired art work  created  by the Aboriginal men who visit the Holocaust Centre to learn about Uncle William Cooper and the fate of the Jewish people 1930s to 1945.”