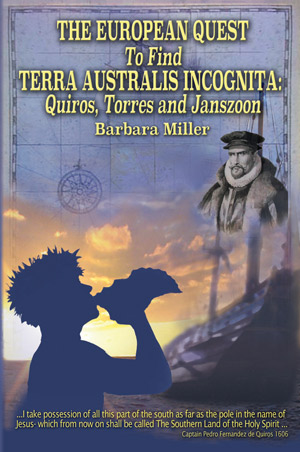 In a tale of drama and suspense, the true story of the quest to find the Unknown South Land – Terra Australis Incognita is told. It has fascinated people since ancient times.

Many Australians were taught Englishman James Cook discovered Australia but Cook came 164 years later than the Dutch and Spanish explorers. The Indigenous people were there from time immemorial. Quiros thought he’d discovered the south land when he landed at today’s Vanuatu. Torres continued and found the Torres Strait separated New Guinea from the south land.

Despite all the passion of the Spanish quest, the Dutch under Janszoon beat Torres to Australia by about six months in 1606. They had deadly encounters with the Aboriginal people of western Cape York, Queensland.

After visiting the beach where de Quiros landed in Espiritu Santo, Vanuatu for the anniversary on 14 May 2012, I thought it might be interesting to re-trace the voyage of de Quiros. I know that was partly the inspiration for my wife doing the research that led to this book.

Amazingly enough, in writing this book, it is as if she has taken us on that journey in the spirit or in our imagination. In this story, we traverse continents, travel through centuries and visit many people groups. It is an exciting journey.

What stirred the explorers to face the hardships in the elusive quest to find this mysterious South Land? The author answers this eloquently. Though she has kept her distance as an historian, her compassion for both the explorers and the Indigenous people of the Pacific they met is palpable.

This book has been written for such a time as this. It positions us to look at our history, at ourselves, what we celebrate and what wounds of history need healing. It is also a story of reconciliation.
We can forget history and repeat our mistakes or we can learn from history. We can find ourselves in the story. We can be history makers and become part of the story.

This is a ground-breaking book. It challenges the history books I grew up with when I went to school. Those books had a British view of Australia’s past. There were other European nations involved in the charting of Australia’s coastline and Australia was peopled by Indigenous people long before Europeans came.

But this book is not just about Australia. It puts Australia in the context of the Pacific and Asia with stories of many Pacific Islands including Vanuatu, the Solomon Islands and Papua New Guinea. The exotic Spice Islands of Indonesia and the Philippines come to life on its pages with fighting between the Spaniards and the Moors. The old world of Portugal, Spain and the Netherlands and the new world of Mexico, Central and South America buzz with the adventures that are told including encounters with the Incas. It is a story also of colonialism and the Age of Discovery.

As the life of Quiros in Spanish-ruled Portugal is woven, we find out about the Spanish and Portuguese Inquisitions, the Reformation and Counter-Reformation and even the slave trade out of Africa and other places.

This is not another dull history book. It is easy reading but well researched. It is the opportunity for an encounter with ourselves as it is ultimately a story about us.

Barbara Miller is married to Norman, an Aboriginal Australian. She has a son, Michael. They live in Cairns, North Queensland, Australia.She is a pastor, mediator, psychologist and teacher and has had a keen interest in working for Aboriginal advancement since1970. She was instrumental in the movement of the Mapoon Aboriginal people back to their land in 1974.