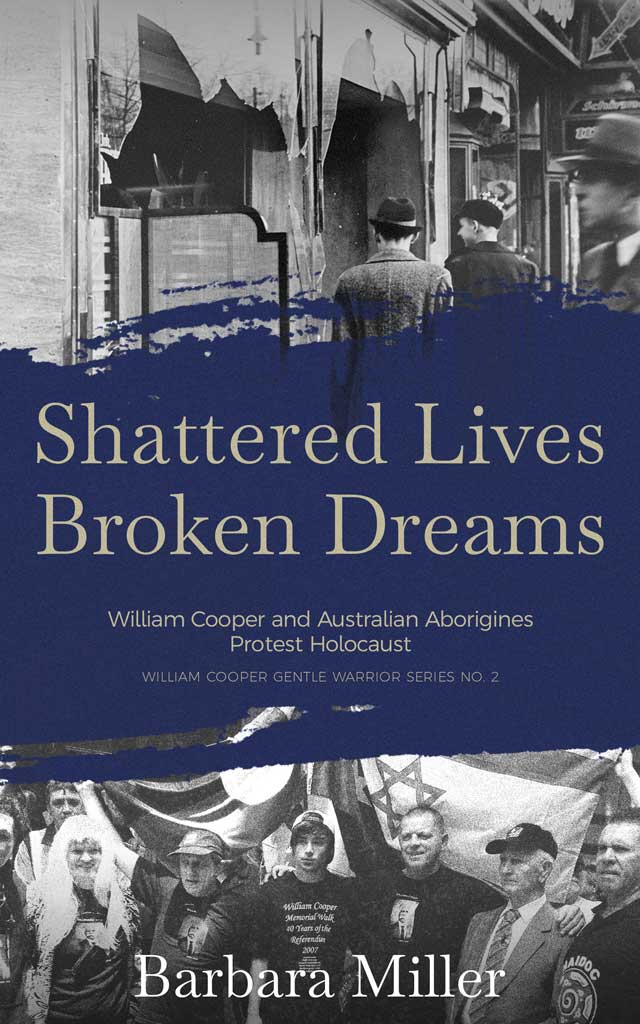 Can there be new facts about the holocaust? This is one of those rare holocaust narratives of resistance to the holocaust by Australian Aborigines – a world away from the fray.

They were not even citizens in their own land but, after Kristallnacht, made a brave stand. William Cooper led the Australian Aborigines League in a protest against Kristallnacht, the Night of the Broken Glass, which resulted in shattered lives and was recognised as the start of the Holocaust.

They protested the “cruel persecution of the Jews” by marching to the German Consulate in Melbourne on 6 December 1938 three weeks after the 9-10 November pogrom in Germany, Austria and Sudetenland that saw 91 Jews killed, Jewish homes, businesses and synagogues destroyed with shattered glass or fire. About 30,00 Jews were sent to concentration camps.

This book follows how the story was lost to history and then found with William Cooper being honoured in many ways by Jews in Australia and at Yad Vashem Holocaust Memorial Center in Israel. His family has carried on his legacy and the story covers his family’s trip to Israel and Berlin in 2017 to continue his work.

Of holocaust books, it has a twist. Aboriginal William Cooper was a noted civil rights leader for his people but the only protest march he led was for the Jews. Read this inspiriting story. This book has facts about the holocaust that will be new and startling to you but it adds to the history on Jews and the history of Australian Aborigines.

This book covers his story and his grandson’s work to fulfill his unfinished dreams and how he has been honoured in Australia and Israel, even having a federal Australian electorate named after him and an Academic Chair of Resistance to the Holocaust named after him at Yad Vashem.

Australian Aboriginal William Cooper has been described as Australia’s Martin Luther King Jnr, Mandela, Gandhi or even an Aboriginal Moses by various commentators.

“I think of the great Jewish leader Moses as he stood on Mt Nebo in present day Jordan and looked at the Promised Land which he was prevented from entering (but he led others to enter in)… In Martin Luther King Jnr’s famous speech “I have a dream, made in 1963 in Washington, we see how he paved a path for Black Americans to freedom, equality and human dignity. But he was cruelly gunned down before he saw it achieved… William Cooper … was not there to see his dreams come true, though most of what he worked for has been achieved in succeeding generations.”
Barbara Miller, White Australia Has A Black History.

“… an indigenous man who too did not enjoy full rights in the country of his birth, should have found it within himself to stand up for the plight of Jewish People. That man was William Cooper and I do not think it inappropriate to refer to him as the Martin Luther King of Australia.”
Rob Schneider, CEO Australian Friends of the Hebrew University of Jerusalem

“… by the Ti-kun Olam he (William Cooper) constantly demonstrated, together with the leadership of delivering his people to their ‘promised land’ of civil rights, human rights and land rights – I believe make him a contender for the title of ‘The Aboriginal Moses’.”
Abe Schwarz, Convenor William Cooper Legacy Project

From inside the book flap:

William Cooper and his people sang a song of freedom called “Drowned old Pharaoh’s army” or Ngarra Burra Ferra in their Yorta Yorta language. They may have sung it when he led the march to the German Consulate. The first verse is based on the Song of Moses:

“When Moses struck the waters
The waters came together
And drowned (old) boss Pharaoh’s army, alleluiah.”

So how did this songline reach from the Red Sea to an Aboriginal group by the Murray River in Australia? And how did it travel that vast distance in time, nearly 4,000 years? Read the book to find out.

“Tzedek, Tzedek Tirdof” – “Justice, Justice you shall pursue” (Deuteronomy 16:18 – 21:9) is one of the most important precepts of religion and certainly it epitomises the life and struggle of Aboriginal activist and human rights leader, William Cooper.

There are many commentaries as to why the word “justice” is repeated twice in this verse and in the case of William Cooper, it has a particular bearing since he is known for pursuing justice on behalf of his own People, the Aborigines and also on behalf of the Jewish People following the seminal tragedy of Kristallnacht and its aftermath.

Barbara Miller, herself a fighter for justice, is probably the most authoritative author I know on the subject of William Cooper and his fight for justice for these two Peoples.

In her latest book, “Shattered Lives, Broken Dreams” Barbara expands on her earlier book entitled “William Cooper, Gentle Warrior” further outlining how the brave acts of William Cooper have helped to awaken in all Australians, the recognition that every one of us can make a difference.

Thanks to the dedicated work of what started as a few – I am privileged to be one of them – but today is a whole cadre of activists promoting the legacy of William Cooper , we have numerous areas were the name of William Cooper will forever be perpetuated, all outlined in “Shattered Lives, Broken Dreams.”

I would venture to say that through the acts of William Cooper and his grandson Alfred (Uncle Boydie) Turner and other family members and friends, the face of Australia has changed forever and the recent naming of a federal electoral constituency after William Cooper is true testimony to this fact.

Barbara Miller has filled in many gaps for those of us interested in the struggle and as I said in Jerusalem in April 2009 at the planting of the first five of seventy trees being planted in honour of William Cooper’s brave act marking the seventieth anniversary of Kristallnacht the previous November, “It is inconceivable for me coming from South Africa where in 1938 native people did not have the same rights as white people, to think that in Australia, an indigenous man who too did not enjoy full rights in the country of his birth, should have found it within himself to stand up for the plight of Jewish People. That man was William Cooper and I do not think it inappropriate to refer to him as the Martin Luther King of Australia.”

Barbara Miller does the memory of William Cooper proud and indeed she does us all proud by bringing to us the amazing story of William Cooper and how his influence and brave deeds continue to inspire us to this day and will do so hopefully for generations to come. Barbara’s new book will certainly go a long way to ensure this.

The story of Uncle William Cooper needs to be told and retold… at least until there is a complete cessation of all the bigotry, right-wing fascism and oppressive discrimination that we are sadly witnessing again today.

The Jewish people are commanded in the Torah to “Zachor” (Remember)!… and by reading and oft-repeating this narrative of Uncle William’s life and legacy, by biographer Barbara Miller, we are fulfilling this sacred task.

Barbara Miller has produced a must-have book on William Cooper the Upstander, and his important legacy.

Barbara documents key elements of this fascinating story of Aboriginal elder William Cooper’s protest against the Nazi Germany’s pogrom of its Jews on Kristallnacht in November 1938. We read about the response of the then Australian government, and then progress to the eventual re-discovery of the facts. Barbara gives us her personal but objective insight as to how members of William Cooper’s family and diverse segments of the Australian community have come together to fulfil William Cooper’s legacy of social justice, and of being an upstander rather than a bystander. A significant and valuable book for every home, school and university library.

Founder – WE ARE HERE! Foundation https://wah.foundation

Barbara Miller’s latest book Shattered Lives Broken Dreams takes the reader on a journey written almost as a travel diary. A journey that spans pre 1938 to the present day.

A lifetime’s work of research, one on one interviews and travels across the Globe to share an eye witness account of history in the making.

I am pleased to write a review for this important book which brings out the relationship between Evian and Kristallnacht and informs us of the brave stand of William Cooper. This is my family’s story. My parents, brother, maternal grandmother and I arrived in Australia in January 1939. My parents tried in vain to get visas for my German family, who were murdered in Auschwitz and Buchenwald, my beautiful 18 and 20-year-old cousins included. The Evian Conference in July 1938 was just four months before Kristallnacht.

The history of Jews in Australia dates back to 1788 when there were eight Jews among the 1500 convicts aboard the First Fleet. More Jewish convicts were to come during the next 60 years. Many Jews came to play a significant role in Australian public life, and so the statement made by Australia at the Evian Conference was deeply troubling. Australia’s delegate, Thomas W. White, declared that, “As we have no real racial problem, we are not desirous of importing one by encouraging any scheme of large-scale foreign migration.”

Sometime before the Evian Conference in 1931, Sir Isaac Isaacs had been appointed the first Australian born Governor-General, having previously served as Chief Justice of Australia. And before that, during the First World War, Sir John Monash had been commander of the Australian troops in Europe.

Evian was a definite turning point in modern Jewish history. By the time the Conference took place, the Nazis had persecuted the Jews for six years. The Nuremberg Laws had deprived the Jews of most of their rights as citizens. There were economic boycotts. There were book-burnings. They were excluded from their professions. They were forbidden to sit, shop, and visit in certain places, to employ Christians and associate with them. There were physical harassments and occasional attacks. As yet there were no mass deportations or large-scale brutal assaults on a country-wide basis. These began after Evian.

Held in Evian, France, in June 1938, thirty-eight countries were represented. The negative position of the Australian government, which announced that it would not liberalise its alien immigration policy from an annual quota of 5000, or 15,000 over three years, was representative of all participating nations.

Following the conference came the Kristallnacht attacks of November 1938. The Australian High Commissioner in London, Stanley Bruce, recommended that the quota should be doubled, but the government rejected this proposal.