Hi all you wonderful readers – There has been a lot happening in the world and we trust you are in a good place and can take time out from your busy schedule to read some interesting books. It has been said that “reading is dreaming with open eyes.” What do you dream about when you read?

Summer or winter, autumn or spring, pick up a book

5 Star Review – We’ve learned about the atrocities that were committed against Aboriginal people during white settlement but never before have I read about the attempts by Aboriginals like William Cooper to try and work with the system, to try and succeed as farmers. Barbara tells a heartbreaking story of betrayal and injustice, not against rebels, but against people who made every attempt to work with the Government. We learn how the original owners of the land didn’t ask for anything more than what was given to the white settlers, but they were denied even this. Worse, it was sometimes given and taken away as collective punishment for the failure of a minority of people to fulfil obligations. forced on them.

This book should be mandatory reading in the Australian school curriculum. (Mike007, Amazon reviewer)

Check White Australia Has A Black History out as it is only $2.99 US for the ebook. Click here.

5-star review, Amazing Story – Shattered Lives Broken Dreams: William Cooper and Australian Aborigines Protest Holocaust ( William Cooper Gentle Warrior Series Book 2) by Barbara Miller. This is a historic novel about how the Australian Aborigines protested against the Jew Holocaust during the Nazi regimen. The fact that these Australians guided by William Cooper had done a fierce protest against the holocaust is something that took me by surprise, I am very aware of everything that happened during the Holocaust, not just because I read about it but because I had classmates that their parents used to have the concentration camp number in their wrists, like a second-hand history close to me during my high school years but I had never heard this story about William Cooper and their mates. The book is well written, it has a lot of investigative work involved in its development, it has some pictures about the events that are narrated and I think that if you are a history fan or if you want to know things about the Jew Holocaust that you don’t know yet, this is a great book to read.
Review by Quirru, Amazon reviewer
Check the book out here, only $2.99 US.

Right – I am with my William Cooper Gentle Warrior book which is available with free shipping from my website. Click here.

Left – My follow-up memoir, Secrets and Lies (2021) which is doing well on Amazon Aust.

Review of Secrets and Lies: The Shocking Truth of Recent Aboriginal History, A Memoir”

5 star review – A Memoir with a Punch – This is a frank and compelling story of a fight that should never have had to happen. Personal anecdotes are interwoven with a very important message for us all and the photographs bring it very close. This author’s writing about the marginalised people in Australia has always resonated with me. I am South African and witnessed the end of apartheid and the inclusion of every citizen as a human being with equal rights. It has, therefore, long angered me that other countries have legislation and social constructs that are just as draconian as those under apartheid yet parade themselves as democracies. I was so glad to read this book, which not only tells Australia’s story of human rights travesties but also demonstrates that there are solutions. It is at once heartbreaking and uplifting and should be required reading for everyone who thinks apartheid is South African only and that there are human beings who are in any way less than other human beings. I recommend this to you as well!
by Joy RS Amazon reviewer
For a closer look, click here 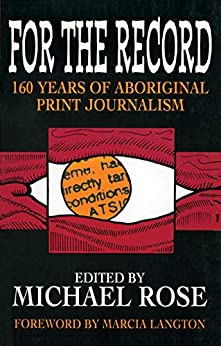 For the Record: 160 years of Aboriginal print journalism by

From September 1836 to December 1837, young Aboriginal clerks produced the Flinders Island Weekly Chronicle, a remarkable record of life on the island off Tasmania where a number of Aboriginal people had been forced to resettle. Copied by hand, it describes the settlement in often poignant terms ‘I am much afraid none of us will be alive by and by as there is nothing but sickness among us. Why don’t the black fellows pray to the king to get us away from this place?’

Starting with this extraordinary newsletter, Michael Rose has brought together examples of Aboriginal journalism from a wide range of Aboriginal and mainstream publications. He includes articles from early activists and others who used newspaper and magazine journalism in their fight for justice.

For The Record also offers the reader an unusual glimpse, through Aboriginal eyes, of key issues and events in Aboriginal and Australian history. Included in the dozens of articles selected: protests about poor treatment on reserves in the 1930s, an eyewitness account of a Maralinga atomic bomb test in the 1950s, Bill Rosser’s reporting of life on Palm Island, Kevin Gilbert’s passionate call for a formal treaty between Aboriginal people and the Australian government and Poel Pearson’s commentary on the High Court’s Mabo decision.

You can check it out here.
Interestingly, there are some articles by me as both Barbara Russell, my maiden name, and Barbara Miller, my married name as I was the editor and a writer for the “N.Q. Messagestick” an Aboriginal newspaper for the North Queensland Land Council.

Question – What is on your reading list for the new year?
Let me know via email