Hi all you wonderful readers – No doubt you are well and truly into your business of the new year with holidays left behind. But we trust you will still have some time out for the pleasure of reading.

A number of commentators are comparing Russia’s invasion of Ukraine with Hitler’s invasion of European countries in World War 11 and wondering how far Putin will go to re-establish the USSR. People are also asking is the west having its Neville Chamberlain moment of appeasement?

Poland was not part of USSR as was Ukraine till 1991, but Poland will have bad memories of how it was treated by the Russians during and after World War 11. Surprisingly, perhaps, my book If I Survive covers some of that story. The reason for this is that I needed to piece together the information from Lena Goldstein, whose story it is, by doing a lot of background research to put it in context. So I will include some extracts here:

The Nazis fought their way into Warsaw. Dead bodies were everywhere. They closed the schools, shut down the newspapers and concerts. The people loved music, but the city fell silent.

The Siege of Warsaw by the Germans began on 1 September 1939, one week after the signing of the Molotov–Ribbentrop Pact, while the Soviet invasion of Poland commenced on 17 September. The Polish Warsaw Army (Armia Warszawa) defended Warsaw, the capital of Poland, as substantial aerial bombardments by the Luftwaffe rained down.
………………………….
To offer what support she could (to her brothers who were sent to the east to fight), Lena went undercover as an actress with a troop of actors who happened to be going to Brest. She says:

“We were already on the Russian side, and people were coming back from the Russian side, saying, ‘Go back, go back because they’re killing people,’ especially Jews because they know the Jews are escaping from the Germans. They’re killing Jews because they know that everybody is selling all that they possess to run away from the Germans to the Russian side. It was dangerous.”
…………………………….
Lena’s sister Fela and her husband did not want to accept Russian citizenship. They were Polish citizens, and they wanted to go back to Poland. Angered, the Russians sent them to Siberia instead, as punishment. Russia had already been sent many dissidents to this remote place. Lena longed to find her sister, hold her in her arms, share sisterly stories, even to know she was alive and not suffering. But there was no word from her. It was as if a chapter of her life had closed.
……………………………
(Because of the Warsaw Uprising Aug-Oct 1944 led by the Polish home army or resistance timed for the retreat of the Germans and advance of the Soviets) The Germans reduced Warsaw to smoking ruins, the skeletons of burnt blocks of apartments surrounded by rubble and destroyed bridges sunk into the river. It was like a ghost town.

The Soviets paid the highest price to defeat the Nazis in Europe, losing more than 26 million troops, so the Allies didn’t want to upset them, and this accounted for their low-level support for their ally Poland. This lack of support was despite the fact that Polish pilots helped win the Battle of Britain in 1940, 115,000 Poles fought in Italy under British command, and after D-Day Poles fought on the western front. They also fought for Britain in the Middle East.

The Tehran Conference sealed the fate of Poland. It was a meeting between US President Franklin D. Roosevelt, British Prime Minister Winston Churchill, and Soviet Premier Joseph Stalin in Tehran, Iran, between 28 November and 1 December 1943. It is reported that:

Stalin pressed for a revision of Poland’s eastern border with the Soviet Union to match the line set by British Foreign Secretary Lord Curzon in 1920. To compensate Poland for the resulting loss of territory, the three leaders agreed to move the German–Polish border to the Oder and Neisse rivers. This decision was not formally ratified, however, until the Potsdam Conference of 1945. (Office of the Historian n.d.)

It seems the president of the Polish government-in-exile, Władysław Raczkiewicz, was not aware of this. Also, the Americans were keen to get Soviet support for the war against Japan. At the Yalta conference between the Americans, British and Soviets from 4 to 11 February 1945, the Allies withdrew support for the Polish government-in-exile and Poland was allowed to become a Soviet satellite. Other decisions were made that enabled a Soviet sphere of influence in Europe that led to the Cold War. Stalin said:

For the Russian people, the question of Poland is not only a question of honor but also a question of security. Throughout history, Poland has been the corridor through which the enemy has passed into Russia. Poland is a question of life and death for Russia. (The Latin Library n.d.)

After the war, Poland became a communist state and remained so until 1989. One occupying force was replaced by another. The Soviets persecuted the soldiers of the Home Army and the resistance fighters of the Warsaw Uprising as being anti-Soviet. Instead of being honoured as brave fighters, they were maligned. A monument to the Home Army was not built until 1989 when the Soviets lost control of Poland. Instead, the Soviet-backed People’s Army was glorified. the People’s Commissariat for Internal Affairs (NKVD), Stalin’s secret police, or the Office of Security (UB), the Polish political police, captured many Home Army fighters, eradicating opposition to post-war communist Poland. The UB operated from 1945 to 1954. They imprisoned the soldiers on charges such as fascism and sent many to Gulags. However, memories of the uprising and lack of Soviet support for them motivated the Polish labour movement, Solidarity, which led to peaceful opposition against the Polish communist government in the 1980s.

In Poland now, 1 August is a celebrated anniversary. On the fiftieth anniversary of the (Warsaw) uprising, in 1994, Poland held a ceremony and invited the German and Russian presidents. Russian President Boris Yeltsin didn’t attend but German President Roman Herzog visited and was the first German statesman to apologise for German atrocities against Poland during the uprising. “

The story of how Australian Aboriginal William Cooper led a group of Aborigines to the German Consulate in Melbourne in 1938 to protest the Holocaust or Shoah is told here.

William Cooper was a pioneer for the rights of Indigenous people in Australia, being the father of NAIDOC, working with key leaders to hold the Day of Mourning on the 150th anniversary of British settlement in 1938 and petitioning the King of England for better conditions for Indigenous people as well as representation in federal parliament. Read more about him here.

This is a personal memoir recording biographical details which illuminates many aspects of contemporary Australian history. Miller takes us on a fascinating journey from her working class background and her spiritual and political awakening through to her involvement in Anti-Vietnam War demonstrations and the Aboriginal Tent Embassy.

This is woven around her coverage of her involvement with helping to re-establish Mapoon in 1974.  Miller gives an insightful treatment of how and why she became engaged in social justice issues in the 1970s. This was a period of major social change in Australia when there was no internet or digital technology and yet Miller manages to convey the passion and commitment of the times.  It is apparent that her social activism is guided and motivated by her faith.

The atrocious treatment of the residents of Mapoon when the Director of Native Affairs used police-state tactics to remove them in 1963 from their traditional lands, is both heart-breaking and uplifting. The author shows great sensitivity, respect, and understanding and manages to convey the petty-fogging autocratic paternalistic control of Indigenous people, which pervaded the period of the Bjelke-Petersen era. One can see what Aboriginal people had to contend with and how, with the re-establishment of Mapoon, a most positive success story has finally been achieved. This is an engrossing and compassionate memoir of an extraordinary woman who through her actions demonstrates what can be achieved through persistent commitment and faith.

Check White Woman Black Heart out as it is only $2.99 US for the ebook. Look here.

Right – I am with my husband Norman at the Queensland Literary Awards ceremony in Brisbane where my book White Woman Black Heart was a finalist for the main award – the Premiers’ Award for a Work of State Significance. My brother Greg and sister-in-law Lynne are behind us.

Left – My follow up memoir, Secrets and Lies (2021) which is doing well on Amazon Aust. For a closer look, click here

The Shocking Truth of Recent Aboriginal History, A Memoir”, by Barbara Miller is a heartfelt historical and personal account about the Aboriginal people of Australia. It is a story about their fight to preserve their ancestral land, their culture, and customs. It is a fight against big mining companies and their very rough treatment of the Government.

This is the third book about the Australian Aboriginal people that by Barbara Miller that I have read. It is as if one is sitting around a fireplace night after night, and being taken back in time. What makes it special is the depth of researched material, and the detailed references from newspapers, conferences, meetings, and quotes.

The reader also gets an insider’s view of the cultural clashes in the Australian society. On one hand, the values of innovation, disruption, and change are desirable. Yet, the indigenous people valued security, conformity, and stability. There are some very shocking revelations in the book, such as the Government policies of withholding wages of the indigenous employees or disallowing the Aboriginal people to receive a formal education beyond a few years … 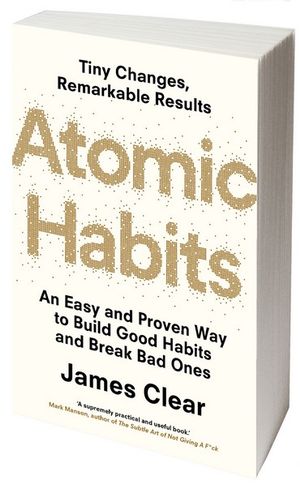 Given up on your new year resolutions yet? Try this. Tiny Changes, Remarkable Results

No matter your goals, Atomic Habits offers a proven framework for improving–every day. James Clear, one of the world’s leading experts on habit formation, reveals practical strategies that will teach you exactly how to form good habits, break bad ones, and master the tiny behaviors that lead to remarkable results.

If you’re having trouble changing your habits, the problem isn’t you. The problem is your system. Bad habits repeat themselves again and again not because you don’t want to change, but because you have the wrong system for change. You do not rise to the level of your goals. You fall to the level of your systems. Here, you’ll get a proven system that can take you to new heights.

You can get it here