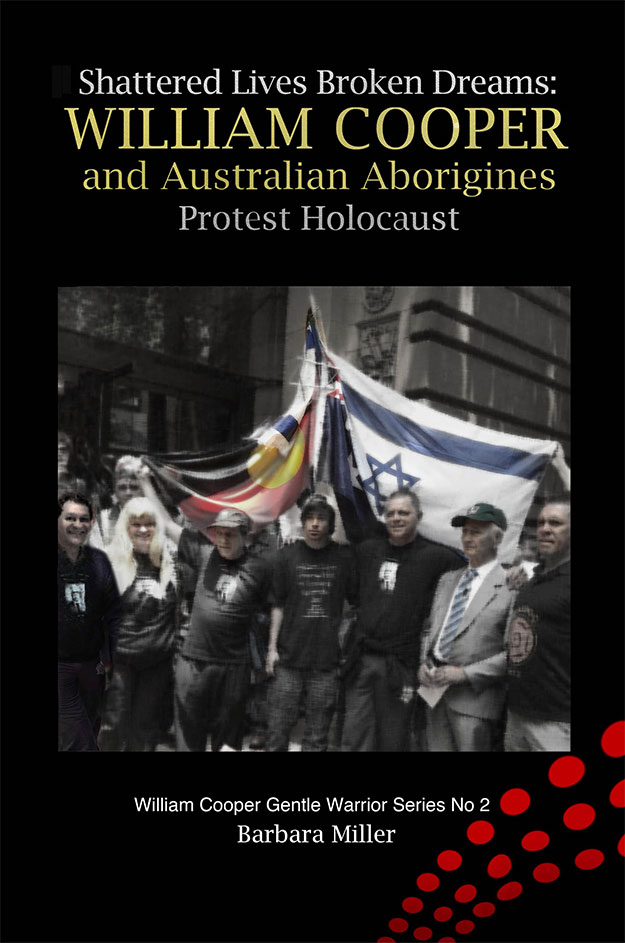 William Cooper led the Australian Aborigines’ League in a protest against Kristallnacht, the Night of the Broken Glass, recognised as the start of the Holocaust. They protested the “cruel persecution of the Jews” by marching to the German Consulate in Melbourne on 6 December 1938 three weeks after the 9-10 November pogrom in Germany, Austria and Sudetenland that saw 91 Jews killed, Jewish homes, businesses and synagogues destroyed with shattered glass or fire. About 30,00 Jews were sent to concentration camps.

This book follows how the story was lost to history and then found with William Cooper being honoured in many ways by Jews in Australia and at Yad Vashem Holocaust Memorial Center in Israel. His family has carried on his legacy and the story covers his family’s trip to Israel and Berlin in 2017 to continue his work. William Cooper was an Aboriginal man of the Yorta Yorta Nation and did ground-breaking work for the “uplift”, as he called it, of his people but the only protest march he led was for the Jews and this was while he was not a citizen of his own land and could not vote. It is truly an inspiriting story.

Photo – Outside the 1938 site of the German Consulate Melbourne where William Cooper and the Australian Aborigines’ League protested Kristallnacht. This 2012 photo shows the historic re-enactment with the Hon German Consul this time receiving the letter of protest.
Book Launch Sydney Jewish Museum 2.30 pm 2 February 2020 of Shattered Lives Broken Dreams and White Australia Has A Black History – William Cooper Gentle Warrior Series No 2 and No 1 respectively.
You need to book – 61 2 93607999
https://sydneyjewishmuseum.com.au/shop/events/talk/book-launch-white-australia-has-a-black-history-by-barbara-miller/

White Australia Has A Black History is available as a paperback from my website and I would love you to review it on Amazon and/or Goodreads.

The link to the book on Amazon is – https://www.amazon.com/dp/B07X1MYCDX

The link to the book on Goodreads is https://www.goodreads.com/review/new/47942441-white-australia-has-a-black-history

Shattered Lives Broken Dreams has not yet gone to the printer and is not yet available on Amazon. 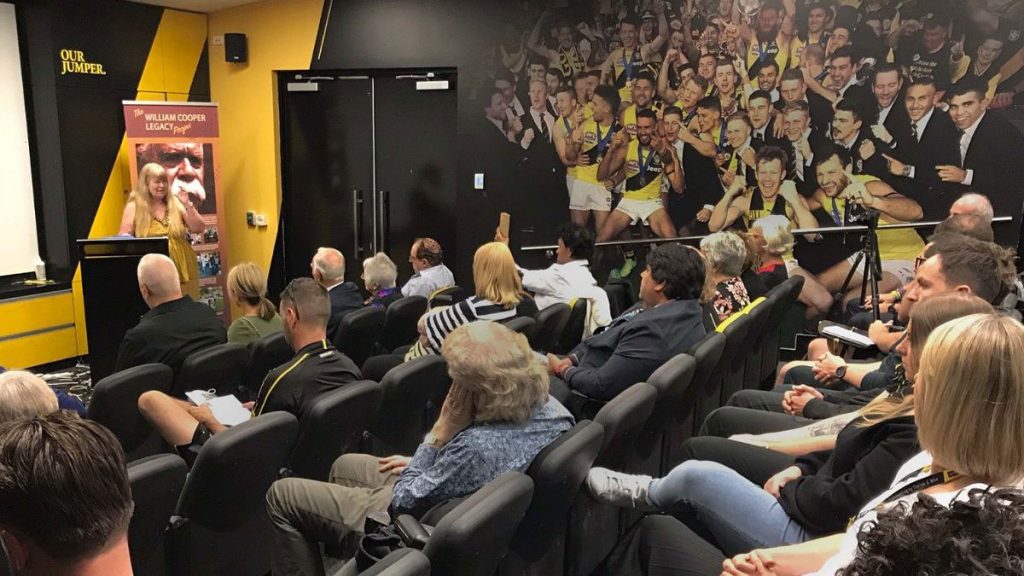 The Richmond Football Club Melbourne and the William Cooper Legacy Project convened by Abe Schwarz hosted a seminar and dinner on 5 Dec 19. It announced a new William Cooper Centre which will integrate sport, culture and diversity as the home to the Korin Gamadji Institute emerging Indigenous leaders program, the Bachar Houli Academy, Melbourne Indigenous Transition School (MITS) and women’s and community football.

There were four speakers at the seminar – Barbara Miller, biographer of William Cooper, Mike Zervos CEO Courage to Care, a teacher from Parkdale College called Natalie Baker and Eli Rabinowitz, founder, the WE ARE HERE Project. Nola Kelly, the great-granddaughter of William Cooper, Leonie Drummond, Uncle Boydie’s daughter, shared briefly. Barbara is pictured speaking. A mural of the Tigers AFL players on the wall.

Minister Ken Wyatt said that William Cooper cut a pathway for people to follow and showed bravery in the face of opposition. He said William Cooper stepped out and left footsteps in the sand to follow. He said he had recently returned from Israel and Prime Minister Benjamin Netanyahu, in a speech, had paid tribute to William Cooper.

The Kristallnacht Cantata: A Voice of Courage held its world premiere on 8 December at Temple Beth Israel St. Kilda, Melbourne. The strident music of the orchestra conveyed the build-up to the Night of the Broken Glass and the shattering of glass and lives that took place. A tribute to William Cooper, the Cantata imagined a moving duet between Cooper and Otto Jontof-Hutter who was arrested in Stuttgart during Kristallnacht along with thousands of other Jews.

The event was held in Temple Beth Israel synagogue and Barbara was asked to read a scripture and she chose Isaiah 62:1-7. There was a beautiful performance by the Yeng Gali Mullum Indigenous Choir.