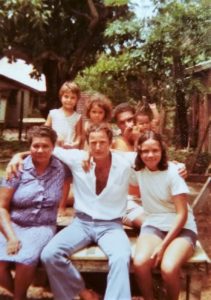 I want to honour a very special woman, Marjorie Wymarra.  I didn’t get a photo of her in time for my memoir but I thank her daughter Pearl Wymarra for this one. Mrs Wymarra, as I called her then, was very keen to help me to help the Mapoon people return to their land from which they had been forcibly removed to make way for mining. She held a meeting of Mapoon people in her home on Thursday Island when I visited her in 1974. She decided to accompany me to Bamaga on the mainland to visit those removed from Mapoon to Hidden Valley or New Mapoon. I had a permit to visit as you couldn’t visit an Aboriginal or Torres Strait Islander reserve without one as it was the days of the apartheid-like Queensland Act.

Despite this, I was considered a trouble maker and put under house arrest in the Bamaga hostel. Mrs Wymarra was also not allowed to leave the hostel though she was Aboriginal and had friends on the reserve and possibly relatives. I will leave the rest of the story for you to read my memoir – “White Woman Black Heart: Journey Home to Old Mapoon, A Memoir.” The ebook version is an instant download at an introductory low price. Get it before the price goes up – https://www.amazon.com/dp/198670601X

In the photo from left to right front row are Marjorie Wymarra, Leo Umdamun and Cheryl Mayor. In the back row left to right is Pearl’s daughter Cheryl Bridger, Toni Ann Mayor and Herbert Wymarra holding Pearl’s sister Maryanne’s daughter. This photo records an interesting story in itself. Pearl tells me there was a storm on Thursday Island and a group of Austrians and Germans who were crocodile hunting had their boat destroyed.  It sunk near the engineers or navy wharf having smashed up against it. Mrs Wymarra’s husband Nicholas had sympathy for the 5 men and went home and asked her if they could shelter them. She agreed and the family looked after them for some time. Their interesting adventure continued. Leo, pictured, is one of the croc hunters. The photo was taken in 1975, the year after I was there.