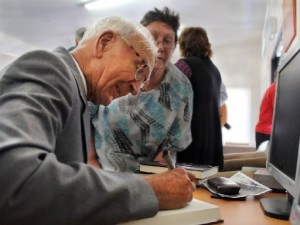 William Cooper: Gentle Warrior by Queensland-based author Barbara Miller tells the story of the man who helped establish the Australian Aborigines League and who became an inspirational advocate for equal rights.

Born near Echuca in 1874, Mr Cooper spent most of his life on missions at Maloga and Cummeragunja working for Aboriginal rights while earning his living as a drover, shearer and agricultural labourer.

In his early 70s he moved to Footscray, Melbourne, where he continued his work as an activist, organiser and relentless letter writer.

His lobbying for improved treatment of Indigenous people culminated in the establishment of a National Aborigines Day, first celebrated in 1940.

However, his concerns went beyond those of his own people.

Mr Cooper led a delegation of the league to the German consulate in Melbourne in 1938 to protest against the treatment of Jewish people under the Nazi regime.

Mrs Miller said she became interested in Mr Cooper’s story after reading the book One Blood by Australian author John Harris about Aboriginal encounters with Christianity.

‘‘William Cooper was one among many people mentioned, but something in his story really inspired a great deal of interest in me, ’’ Mrs Miller said.

‘‘He was a gentle warrior, he believed in the democratic process and British justice. He’s really a national figure, his story needs to be known.’’

Mrs Miller said she met Mr Cooper’s grandson, Mooroopna’s Alf Turner, in 2010 while in Israel at the unveiling of a memorial and garden dedicated to Mr Cooper at the Yad Vashem Holocaust Museum in Jerusalem. She has since spent time at Barmah, Echuca and Cummeragunja and talked with Mr Turner and other relatives of Mr Cooper.

Mr Turner said he was proud to see the book on his grandfather’s life launched.

‘‘It’s special to me to know that my grandfather’s story is being told. What he did was one of the greatest humanitarian acts witnessed in Australia, ’’ Mr Turner said.

‘‘He is a real role model. His story should be told from time to time.’’

William Cooper: Gentle Warrior by Barbara Miller is available online at www.Xlibris.com.au, or email orders@Xlibris.com.au or phone Mrs Miller on 0466076020.