Cairns will soon be celebrating NAIDOC Week and recognizing the contribution of Indigenous people to the life of the nation. An exciting new collection of Aboriginal art on the theme of Rainforest and Reef by rainforest Aboriginal artist Munganbana or Norman Miller will be exhibited during NAIDOC Week in the Cairns City Place. The work features landscapes, seascapes and riverscapes and features many of the animal, bird, plant and sea life of the region. The exhibition will be in the C.1907 Contemporary Artspace from 9-20 July from 10am – 6pm with free entry. An opening will be held on Thursday 11 July from 5.30-7.30pm with light refreshments at which Munganbana will be launching a “boomerang petition.” The art exhibition is sponsored by the Cairns Regional Council. 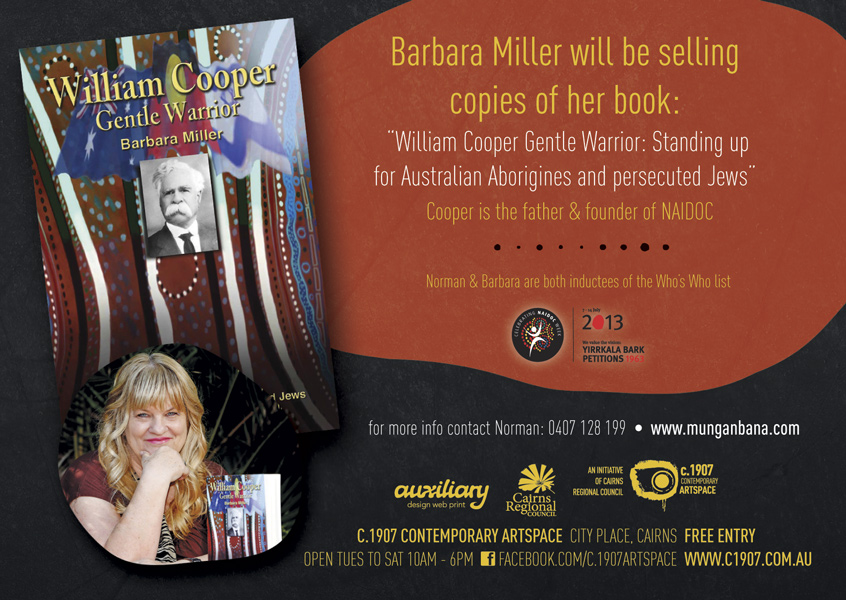 Munganbana says “I paint from who I am and I paint from the rich natural and cultural landscape that I am part of and which inspires me. I am inspired by my Creator, by my family and by my Aboriginal heritage as a member of the Jirrbal, Bar-Barrum and Tableland Yidinji tribes. I was born in Atherton and grew up at Wondecla in north Queensland. I am part of the rainforest Bama or people. My name is Munganbana which means ‘Mountain Water’ in the Jirrbal language. The name Mountain Water describes my work – powerful and peaceful – and the land from which I come – crystal cascades and volcanic lakes.”

The painting featured on the invitation card gives us a glimpse of the painting Mr Miller presented to Kevin Rudd to thank him for and commemorate the bipartisan apology the Australian government gave to Indigenous people in February 2008 for the children taken from their families and communities as a policy of assimilation.

Accompanying the exhibition will be a book by Norman’s wife, Barbara Miller called “William Cooper, Gentle Warrior: Standing Up for Australian Aborigines and Persecuted Jews”. It is the life story of Yorta Yorta elder William Cooper who lived from 1860-1941 and was the father and founder of NAIDOC. She said “William Cooper wanted a permanent Aborigines Day and persuaded the National Missionary Council of Australia to hold the first Aboriginal Sunday on 28 January 1940. For 15 years it was held the Sunday before Australia Day. In 1955, with the involvement of federal and state governments, it was changed to the first Sunday in July and known as National Aborigines Day. In 1957, the National Aborigines Day Observance Committee (NADOC) was formed. To include Torres Strait Islander people, it was changed in 1989 to NAIDOC Week and the national celebrations were extended.”

The theme of this year’s NAIDOC is about the 50th anniversary of the ground-breaking Yirrkala Bark Petition. William Cooper and the Australian Aborigines League also wrote a petition to the King of England in the 1930’s for better conditions for Aborigines. Though it had 1814 signatures obtained nationally, half from Palm Island in Queensland, it was not sent to the King by the Australian Parliament as Aborigines were British citizens but not Australian citizens. This led to a Day of Mourning on Australia Day for the 150th anniversary of the nation’s settlement, the establishment of National Aborigines Day and the struggle for the 1967 referendum.

Mrs Miller said “In an amazing current story, William Cooper’s grandson, Alf Turner is collecting 1814 signatures from Indigenous people on the same petition with a copy for supporters to sign. He hopes to present it as a symbolic gesture to the King’s granddaughter, Queen Elizabeth in this 75th anniversary year of 2013. The Millers may be contacted for those who wish to view or sign this historic petition.