We organised the re-enactment of the walk from William Cooper’s home in Southhampton St Footscray to the exact location of the 1938 site of the German Consulate in 419 Collins St Melbourne. The walk was led by Kevin Russell, William Cooper’s great grandson and Norman walked with him all the way. I walked part of the way and then joined the walkers from the East Melbourne Synagogue. Both groups met at the William Cooper Justice Centre and then did the last part of the walk together. A large number of Aborigines, Jews, including Holocaust survivors, Christians and others joined the walk as well as many camera men. It was very moving with some of the Holocaust survivors in tears to hear the German Consul express his sorrow at what had happened and that a wrong needed to be made right. It was important for Uncle Boydie to complete his grandfathers work. We then moved to Silk Road next door, 425 Collins St where Pauline Rockman, CEO of the Jewish Holocaust Centre, Michael Pearce and myself spoke at my book signing event.

New book on William Cooper – and the march makes its mark 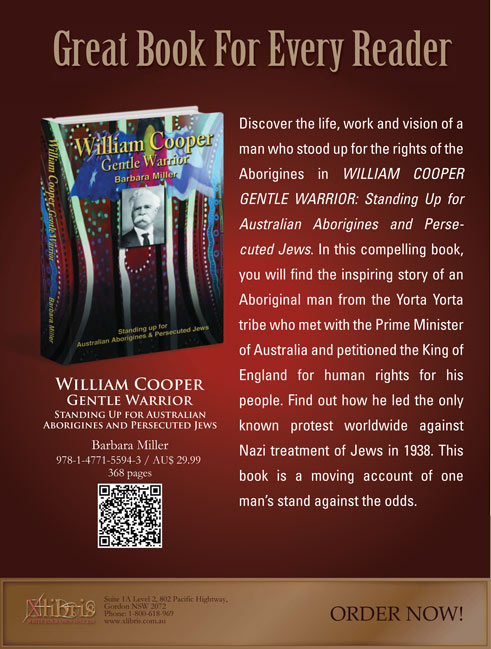