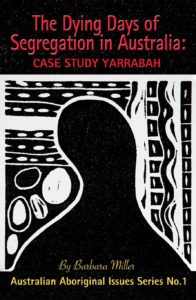 Orwell’s book “1984” introduced the term “Big Brother” for the kind of control and scrutiny the government held over the lives of people in his novel. It is striking that in Queensland, it is 1984 when this kind of Orwellian Big Brother relationship of the state to Indigenous people came to an end with the abolition of the Queensland Aborigines Act and its counterpart, the Torres Strait Islanders Act. “The Acts” had existed for nearly 90 years. I should say segregation legally came to an end as it dragged on for a few more years as my book “The Dying Days of Segregation in Australia: Case Study Yarrabah” shows.

I cannot overstate, however, the turning point that occurred in 1984, which is why, I believe, this book is so important.

It is written, primarily, at a time when one era came to an end and another era began and we see the emergence of a measure of local government and a measure of land ownership on Aboriginal and Torres Strait Islander communities in Queensland. We also see the gradual whittling away of human rights abuses. My writing on this issue at the time was so hot and controversial that it was not published until 1986 lest it raise the ire of the Queensland government.