A recent visit to Mapoon by author Barbara Miller and her husband Norman found that people are still returning to Mapoon, 42 years since she helped them move back and rebuild the community that they had been forcibly moved from by police in 1963 because of mining leases. 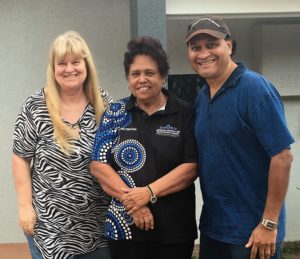 Mapoon Mayor Aileen Addo centre with Barbara and Norman Miller on each side. Image supplied

Mrs Miller said, “In fact it was this month, on 19 September 1974, that they moved back with the help of the Aboriginal legal service, Mick Miller and International Development Action, the group I was working for.”

“Ray Harding of the ABC, photographed the move back from a light plane as he followed our convoy. I would love to find a copy of this footage as I’m writing my memoir,” said Miller.

“It was the most unusual looking convoy. Cec and Rosena Toumese left first in an army truck towing a railmotor converted to a caravan. It was carrying the cattle equipment of the Marpuna Company – saddles, bridles etc. Peter Noble and Peter White traveled with them. Next was the landrover, owned and driven by Tommy Hudson, followed by the car owned by Ces Toumese and driven by Alan Bourke, then the truck driven by Clarrie Grogan loaded up with the Wheeler and Miller families, solicitor Bruce Johnston, myself and a pile of gear.”

Miller continued, “For 11 years, the Mapoon people had been wanting to return and Jean Jimmy had been attending FCAATSI conferences, gathering support,” said Miller.

“Jerry and Ina Hudson led the move back. These heroes are no longer with us but today Mapoon is a thriving community and it honours them with buildings named after them.”

“Amazingly it only took me 6 months to do the organising to get the people back where they wanted to be. However, our support continued for some time afterwards and the pioneers of the move back did it tough for quite some time,” said Miller.

“As the infrastructure was built over the years, more people have moved back and the community have had their rights to local government and land recognized. It is now in many ways a model community and that is due to the many people who have rebuilt it over the years,” said Miller.

“One of the things I enjoyed on my visit was speaking to the adult grandchildren of the people I worked with long ago and they love Mapoon for its lifestyle of fishing, crabbing and hunting and so do not want the city lights. They love the bush and the sea. They are truly at home,”said Miller “and would make their grandparents proud.”