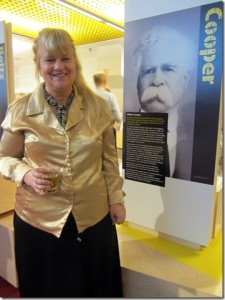 I was privileged to attend the opening of the Courage to Care exhibition and program in Brisbane on 5 June 14 and I’m pictured beside one of the exhibits. It honours William Cooper for leading the only known private protest worldwide against Kristallnacht in 1938 when he and the Australian Aborigines League walked from his home in Footscray to the German Consulate in Melbourne to deliver a letter of protest which was not received. Kristallnacht was the start of the Holocaust. Cooper was a Christian and a campaigner for his people.

Different groups of schoolchildren would come each day as part of a 4 week program where they could watch a DVD encouraging them not to stand by when other schoolchildren are bullied, listen to a Holocaust survivor, look at exhibits of people who saved Jews and then participate in a debriefing and group discussion. There were many amazing stories of people’s Courage to Care. This is not an exhibition that makes people feel guilty but brings out the best in people and encourages them not to be intimidated. It was looking at positive stories while putting a face on incredible suffering that we don’t want to see repeated.

I have helped to bring Courage to Care to Cairns where it will start in 15 months with Cairns schools. I was privileged to be a speaker at a Bnai Brith Courage to Care function in Sydney 17 Nov 13 where I was able to donate some of my Cooper books for fundraising and my husband Norman donated a painting for fundraising.