Hi all you wonderful readers – Well a little late with this newsletter but it has been a busy writing time. I was happy to write the history of the leaders of an Aboriginal community I’ve had a lot to do with for a special event they have in May.

I’ve also been asked to write a handbook for schools which will be a surprise to readers until I finish it.

Last week I did an interview with a South African writer on the topic of Writing Memoirs That Matter. It will be part of an international book summit where a number of writers speak about the writing and book publishing process. I’ll keep you posted on that too in case you want to check it out. Both of my memoirs – White Woman Black Heart and Secrets and Lies have been bestsellers on Amazon from time to time.

Earlier on, I did an interview with ABC National Radio for their overnight program on my books on William Cooper. It meant I was interviewed live and answered questions from the audience at 3am in the morning, a big ask!

Left – Patricia Ryan launched her book on communication at the Rydges Cairns last week and I was one of the authors from Tropical Writers who shared about my books and had them available for sale.

Right – Donna Odegaard who owns First Nations TV in Darwin visited Munganbana Aboriginal Art Gallery and is photographed with me there. My books are available here at 33 Lake St Cairns. Ph Munganbana 0407128199. While there, check out his awesome paintings.

Review of If I Survive
from Amazon
Guy S
5.0 out of 5 stars A powerful must read book
Reviewed in the United States on April 11, 2022
Verified Purchase

This book is a tour de force, a must read book that blends the personal story of a survivor of the Warsaw Ghetto uprising and 2nd world war, with the history of that period, made vivid through the eyes of a brave young Jewish girl enduring the pain and suffering of that horrid period, helping those in need the best way she could, and hiding from not only the Nazi’s but her Polish countrymen, for such long periods in horrendous conditions.

I have read many books about this period and yet this book touches one deeply not only because of the personal exploits, hope and survival of Lena during this terrible period in history, but because the author successfully meshes the history of that period with the story, such that the impact of what was truly happening at that time, the occupation of Poland by the Nazi’s, the resistance, the day to day living under occupation, the concentration camps, is felt with force, not at all like many boring history books. The aim of this book is not only to save the personal story of a single person that endured and survived that treacherous period for eternity, but to educate the younger generation of what really happened at that time, in the hope that such barbarism will never happen again. In my view, this book is a must read, not only by adults, but by all older schoolchildren, alongside Anne Franks diary. It is worthy of that.

REVIEW OF THE DYING DAYS OF SEGREGATION IN AUSTRALIA

Dan Stirling
5.0 out of 5 stars A compelling first-hand account of the apartheid-type treatment of Aboriginals in Australia
Reviewed in the United States on September 10, 2018
Verified Purchase

A compelling first-hand account of the apartheid-type treatment of Aboriginals in Australia, even in modern times, and the efforts to eliminate legal discrimination from the 1960s to 1980s.
Long after most Western countries had given full equality to all citizens, parts of Australia continued to subjugate its Aboriginals. Segregation, control over property ownership, and limits on education were just part of a system designed to keep them under the thumb of their supposed superiors. Barbara Miller documents the abuses as well as the efforts made to overcome them, culminating in the Community Services (Aborigines) Act 1984 which finally showed a federal commitment to ending discrimination. In this 2nd edition Miller updates with changes that have come about in the 30-plus years since the Act.

Left – I was being interviewed by zoom a few days ago for an international book summit in June on writing and publishing. My topic was Writing Memoirs That Matter.

Right – An earlier launch of a book on William Cooper at the Lamm Library in Melbourne.

Question – What is on your reading list for the new year?
Or a book that you like? Let me know via email 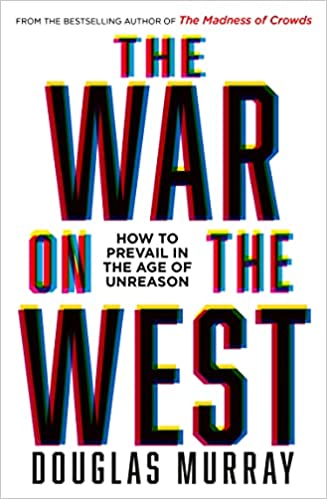 WAR ON THE WEST
By Douglas Murray

“‘The most important book of the year’  Daily Mail

The brilliant and provocative new book from one of the world’s foremost political writers
‘The anti-Western revisionists have been out in force in recent years. It is high time that we revise them in turn…’

In The War on the West, international bestselling author Douglas Murray asks: if the history of humankind is one of slavery, conquest, prejudice, genocide and exploitation, why are only Western nations taking the blame for it?

It’s become perfectly acceptable to celebrate the contributions of non-Western cultures, but discussing their flaws and crimes is called hate speech. What’s more it has become acceptable to discuss the flaws and crimes of Western culture, but celebrating their contributions is also called hate speech. Some of this is a much-needed reckoning; however, some is part of a larger international attack on reason, democracy, science, progress and the citizens of the West by dishonest scholars, hatemongers, hostile nations and human-rights abusers hoping to distract from their ongoing villainy.

In The War on the West, Douglas Murray shows the ways in which many well-meaning people have been lured into polarisation by lies, and shows how far the world’s most crucial political debates have been hijacked across Europe and America. Propelled by an incisive deconstruction of inconsistent arguments and hypocritical activism, The War on the West is an essential and urgent polemic that cements Murray’s status as one of the world’s foremost political writers.”