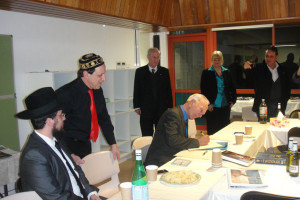 “Who would ever have thought that the grandson of Aboriginal rights campaigner William Cooper who tried to send a petition to King George V in 1938 would now be sending it to the King’s granddaughter Queen Elizabeth 11 in 2013, 75 years later. But that is exactly what Alf Turner (also known as Uncle Boydie) is doing” said Barbara Miller, part of a team helping him do it.

“Bipartisan support for the petition is rising” said Miller “with Opposition leader Tony Abbott signing it on the same day that the Journey to Recognition was launched at Federation Square in Melbourne. Education Minister Peter Garrett has also signed it as has Jeannette Powell, Victorian Minister for Aboriginal Affairs and former Australian Democrats Senator Aden Ridgeway and AFL legend Michael Long. There are currently over 80 signatures on it.”

END_OF_DOCUMENT_TOKEN_TO_BE_REPLACED

“The grandson of William Cooper, the aboriginal who led the only known private protest against Kristallnacht in 1938 is campaigning to send his grandfather’s petition to the Queen.”

Continue reading over at J-wire via the link below.