The Canberra declaration story and the call to revitalise Australia 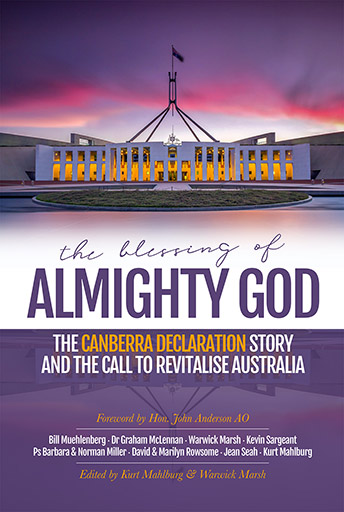 CHAPTER: Canberra Declaration – the birth of a new push to protect our Judeo-Christian heritage

By Ps Barbara and Norman Miller

The book was launched on zoom for the 10th anniversary of the Canberra Declaration which was launched at the Government of God conference hosted by Norman and Barbara at Parliament House Canberra on 23 July 2010.

“Our forefathers came here from the nations to this nation of Australia and joined with the forefathers of the Indigenous people of this land to set up this great nation of Australia which was founded on a Christian constitution. As the states united to form in 1901 this nation in terms of a federal entity, it was based on the Judeo-Christian heritage. Our laws are based on the values of the Judeo-Christian heritage and we want to affirm that today. They have stood with us well as a nation. We have seen some decline in recent years but we want to affirm today that the government of this nation is on the shoulders of Jesus Christ.” (Isaiah 9:6-7) Barbara Miller 23 July 2010